The didgeridoo is an Australian wind instrument of aboriginal origin. They are constructed out of hollowed tree trunks. 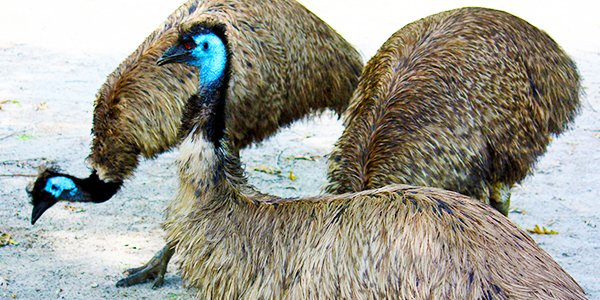 Emu are another member of the ratite group, which includes ostrich and rhea. They can reach almost 7 feet tall, sprint up to 30 mph, and take strides that are 9 feet apart. This is partially because they are the third largest bird in the world and also because they are the only bird to have calf muscles. Males and females can be hard to distinguish visually but can be told apart from the different sound they make through their inflatable neck sac. The blue coloration on their face is similar to the blue-green color of their eggs. Their tail feathers are stiff and can be rattled by the bird to scare off predators, such as dingoes. Emu have vestigial wings, very small appendages with a clawed tip that are incapable of supporting flight. 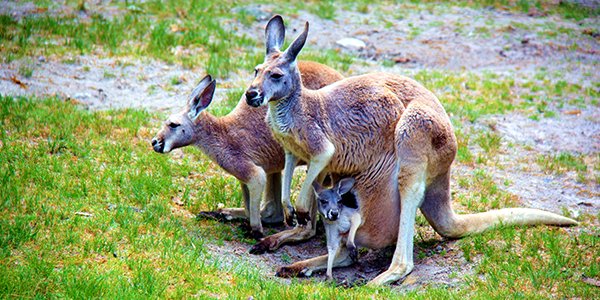 A full grown male red kangaroo, referred to as boomers or jacks, can stand nearly 6 feet tall with a total body length of 9 feet including the tail. They are the largest kangaroo species and marsupial. While called a ‘red’ kangaroo, only males tend to have the red-orange coat. Females are smaller and often have grey coats. A kangaroo’s tail is extremely strong and thick. As they hop, all of their momentum is moving forward, so the tail acts as a counterweight to help keep the animal balanced. In a single bound, a kangaroo can jump over 20 feet and nearly 10 feet off the ground. The red kangaroo is the largest living marsupial. Unlike placental animals, marsupials give birth to underdeveloped offspring, which do a significant amount of growth after being born. A newborn joey is born after gestating for only a month and is blind, hairless, and the size of a lima bean. This joey then climbs using its forearms into its mother’s pouch where it will start nursing. It will remain inside the pouch for 6 months, at which point it is large enough to begin exploring the outside world.